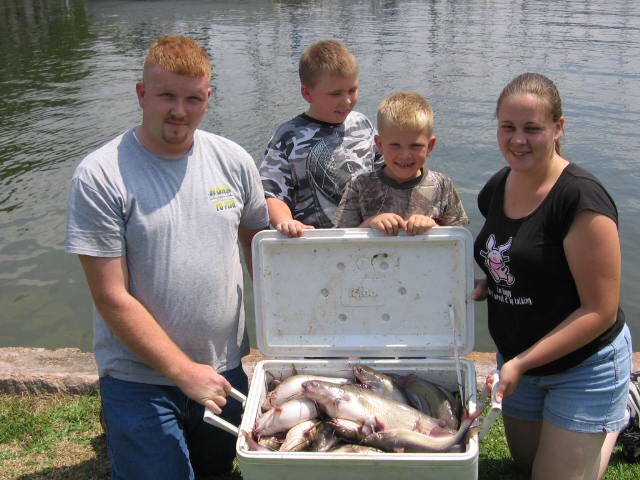 Catfishing on Lake Conroe was for the most part very good in the month of July on days when the wind was normal. We had several very windy days which put a slight damper on things on certain days but eating size catfish in the 1 ½ pound to 5 pound range were caught in only a few hours by most of our Catfish Killer Fishing Guide Service customers.

Everyone commented about how comfortable and cool they were while fishing under the FM 1097 bridge totally out of the hot sun in 90+ degrees weather. When there is just a small breeze blowing, one feels like they are fishing in an air conditioned room!
Most of the catfish were found in 21 to 26 feet of water suspended right above the thermocline. Catfish Killer Cheese Punch Bait was very popular with the channel and the blue catfish alike. Our three-time customer named Jeremy of Houston (three years old) had an absolute blast pulling in catfish up to 3 pounds on his 2 ft. long Snoopy fishing pole! It was a lot of fun for this guide to watch and the next time he comes catfishing, I will be sure to take a video and post for all to see on my website. Of course, that’s with his dad’s permission.

On some nice cooler mornings in July, some of our catfishing trips started around the power lines by Bentwater Subdivision which is a very popular place to catch catfish among other catfishermen. If the bite was good, we would fish there until the sun started warming us up a little and then move to the FM 1097 bridge. Several limits of eating size channel and blue catfish were caught during the month of July on trips with Catfish Killer Fishing Guide Service and it looks like the month of August may wind up being the same way.