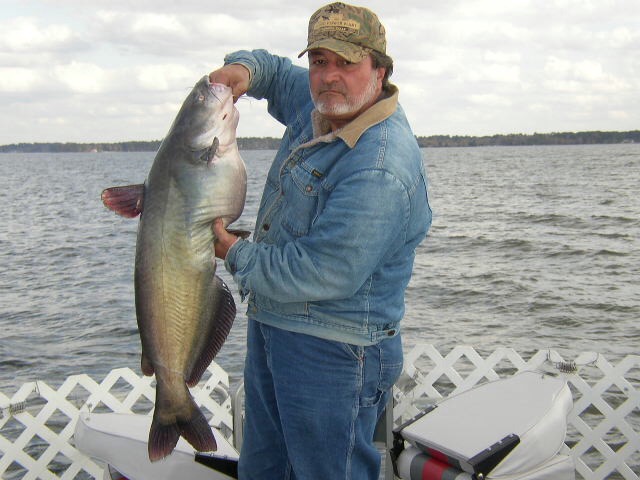 About this same time of the year, most deer hunters are gearing up and getting ready for deer hunting season to begin.
While at the same time, Lake Conroe Catfish Killer Fishing Guide Service is gearing up and getting ready for its yearly trophy catfishing season to begin. The excitement is steadily building as the time draws near for hunting for Lake Conroe’s many monster trophy catfish!
Around the first part of October is normally when the weather and the water start to cool down on Lake Conroe and the monster blue catfish get into their fall and winter pattern of schooling up and traveling the deep creek beds and sloughs in search of bait fish to eat.

Drift fishing is the most common method of fishing for trophy catfish in most of the lakes and rivers in the State of Texas as well as other states. We have been using this method for several years and have caught many, many big blue catfish. However, after the sun starts to warm the water in the morning, we sometimes target the monster catfish that have moved into more shallow water.
We are on the water a little after daylight. We cut our bait up and head to the deep water main lake channel and creek channels in search of the schools of monster trophy blue catfish. We offer our trophy blue catfish a wide variety of baits that they love which includes whole shad, cut shad, Bluegill Perch and shrimp.

Catfish Killer raises Coppernose Bluegill in his home pond and has an endless supply of perch for bait when needed. No one knows what will be caught on any given trophy catfishing trip, but there is a good chance that monster catfish up to just under 100 lbs. can be caught. Some smaller size blue catfish and channel catfish for eating are normally also caught on each catfishing trip so be sure to bring your ice chest with ice in it. The State of Texas laws state that you can keep any catfish (blues and channels) over 12 inches long and the limit is 25 catfish total per person.

You can eat trophy catfish, but they have a lot of fat so they do not make the best fish fry in the world. Most people who catch a very large trophy catfish will take pictures to show their friends and family and release the fish back into the lake to be caught another day. Plus, the female blue catfish will lay thousands of eggs every year which aids in keeping the Lake Conroe blue catfish population so high.

You will never hear this guide say that you can’t keep any catfish that weighs over 10 lbs. because that is strictly between you and the State of Texas!